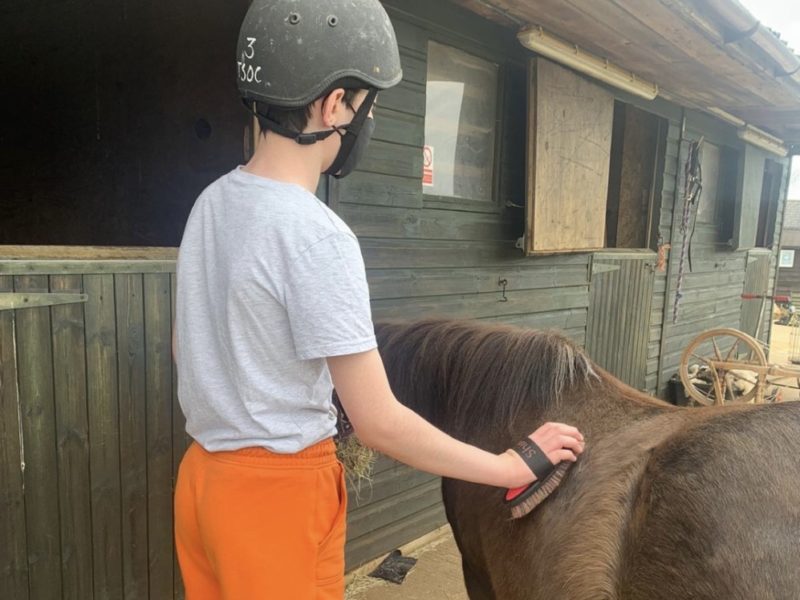 Has been able to build trust and positive relationships with his horse, his peers and his coaches.

Can now reflect on the importance of sharing his feelings and emotions with others.

Children with a hearing impairment are likely to report feeling isolated with fewer friends which can affect self-confidence and social interaction skills. The impairment can cause delays in the development of communication skills, in terms of speech and language which can have a negative impact on education.

It can be tough living in a family affected by disability with children often experiencing social exclusion as a result of their disabled parent’s restricted access to employment, housing, transport, hospitals and schools.

“George is a keen photographer and recently with our encouragement, entered the ‘Sense of place’ photography competition run by the Country Trust. This challenged the photographer to ‘explore and unlock the meaning of place and to capture somewhere special to you.’ George was named one of the winners for his beautiful image of Abington Park.”

George is a year 9, with sensory issues and 75 – 80% deafness in both ears. His dad is disabled after an accident and uses a wheelchair.

George attends 2 days per week, as part of an alternative education programme. The aim is to support him to regulate his behaviour in a group of his peers and deal with his sensory overload and frustrations caused by his hearing impairment in a positive way. He is encouraged to talk to coaches about any issues or things that are bothering him.

At the start of the programme, George often displayed sensory overload which led him to feel frustrated. This included loud noises such as tractors, machinery and sounds horses make. He struggled with the noise of the walkie-talkies used by coaches on site, as they would make him jump. He was able to express his frustrations with coaches, however often this was shared over the conversations of others in the group, so was sometimes inappropriate.

George displayed empathy to horses when working with them and ensured his behaviour was positive and appropriate, however he was not so tolerant of his peers and became annoyed if ever there was a disagreement in the group.

George was easily frustrated in the classroom environment, initially struggling to engage with written work. With support and encouragement, he would ‘give the tasks a go’ however he would become irritated when he could not achieve something first time. He has now learned how to complete breathing exercises or take himself away from a stressful situation to allow his mood to calm.