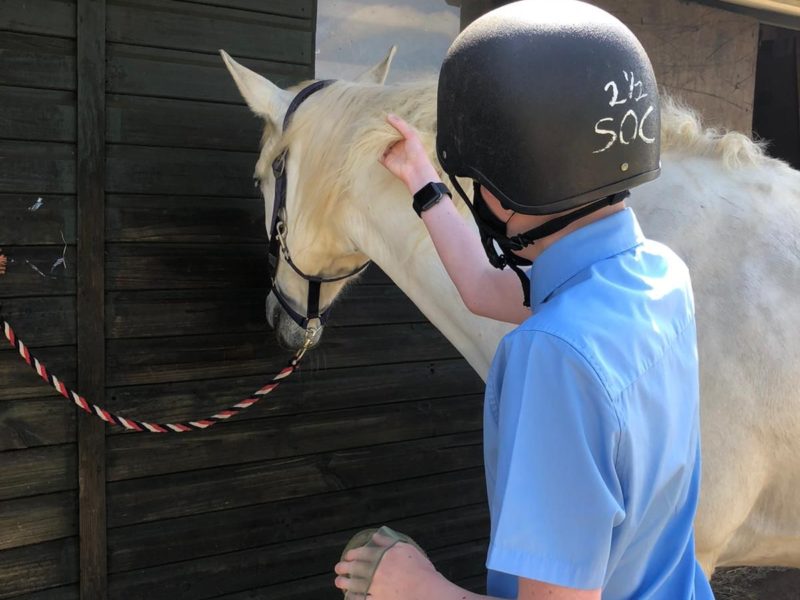 Has been able to build trust and positive relationships with his horse, his peers and his coaches.

Can now reflect on the importance of sharing his feelings and emotions with others.

Multiple factors contribute to a child’s struggles with anger. Genetics, biological and environmental factors also play a role. Trauma or family dysfunction make it more likely that a child will exhibit anger or aggression that interferes with their daily life.

Issues with anger can lead to risky behaviour, refusing to go to school, isolation, eating problems, depression, and self-harm. Often drinking too much alcohol or taking drugs can also be seen as ways of coping with anger issues.

Children with a hearing impairment are likely to report feeling isolated with fewer friends which can affect self-confidence and social interaction skills. The impairment can cause delays in the development of communication skills, in terms of speech and language which can have a negative impact on education.

It can be tough living in a family affected by disability with children often experiencing social exclusion as a result of their disabled parent’s restricted access to employment, housing, transport, hospitals and schools.

Fen is a 13 year old boy who lives with his grandparents. Fen and his siblings were removed from their parents in Ireland but still have contact with mum. Dad has a court order forbidding contact.

Fen has emotional difficulties and has been excluded for verbal abuse towards adults and physical assault on another YP. Fen has outbursts of anger which result in him being verbally abusive and over physical (running into locked doors) or being polite and calm. Staff at mainstream did not know what version of him they were going to get. There was no obvious catalysis for his change in behaviour.

At the start of Fen's sessions, he appeared to lack confidence and social skills which caused him to become disengaged and verbally abusive. He spent some sessions refusing to partake in any of the activities.

When he did choose to join the group, he took part in little to no communication with coaches or peers, and when encouraged he noticeably appeared uncomfortable lowering his head and sometimes taking himself away from the situation.
When faced with a challenge or unfamiliar situation he would again refuse to engage or become verbally abusive.
Once comfortable with his surroundings and coach he was encouraged to join the group and began to recognise the importance of being a member of a team and having a responsibility, this appeared to give him an improved self-esteem which led to him being able to engage in more confidence building activities. These resulted in him being able to manage and overcome his anxieties when faced with a challenge.

Now recognising the importance of responsibility, he can relate his emotions to the physical sensations attached to these, giving him the confidence to share them openly and maturely.

Now having a greater self-confidence, he can work closely with his chosen horse and peers. Fen can now recognise the impact his behaviour has on others and confidently and maturely talk about his anxieties when they arise.